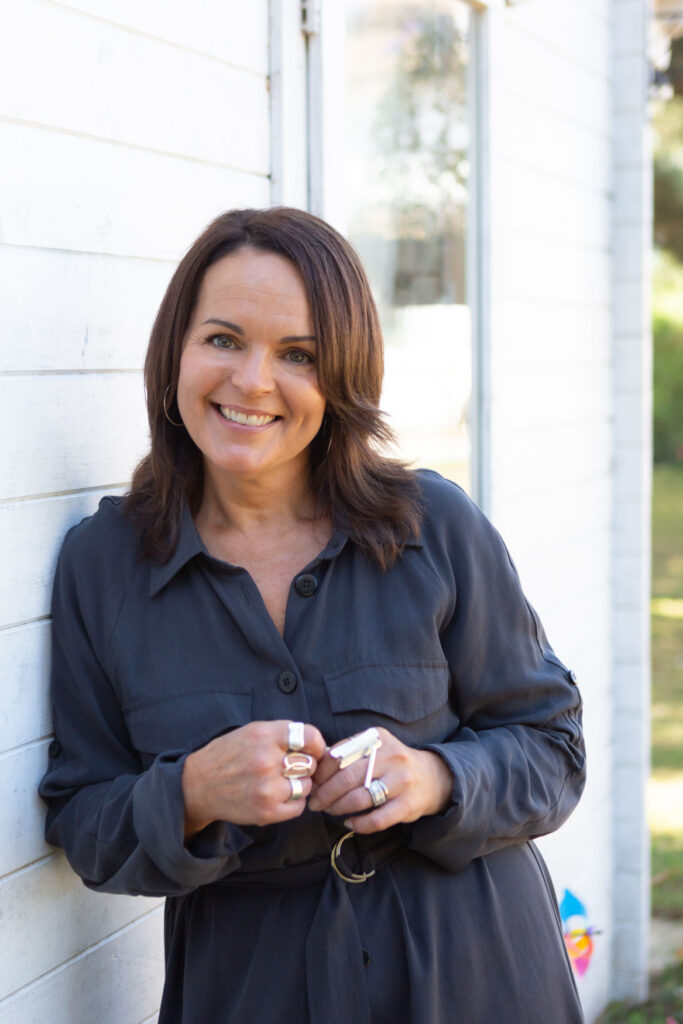 After 40 years of chronic eczema, yo-yo dieting, health issues and watching loved ones suffer devastating illnesses, a part time job with a health supplement company led to me discovering that the advice on what to eat for health was not all it seemed. Upon finding that the current dietary guidelines have no scientific foundation and instead work against our biology, I qualified first in diet and nutrition and later in the management of diabetes.

The shocking truth has made me Wide Eyed. Using my cookery skills acquired through a fussy childhood and subsequent career changes I have created over one hundred (and counting) nutrient-boosting recipes used in the Wide Eyed Food Plus Knowledge Course which allows my clients to heal themselves like I have. 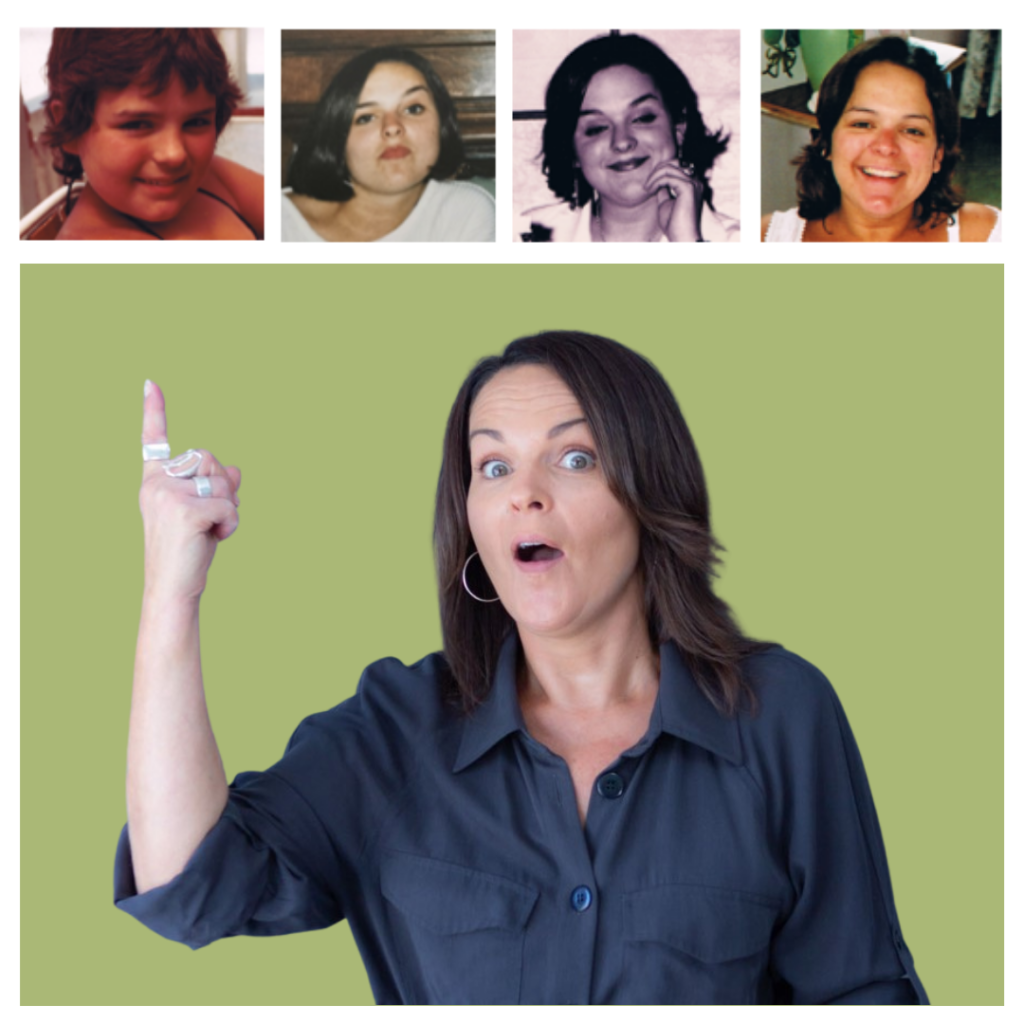 My love of food came from a fear of food as the worlds fussiest child and I put on weight from the age of six. To overcome my fear of being offered foods I did not like, I cooked from an early age and my tastes expanded at 19, when I was desperate to cure the chronic eczema I'd had since birth. The story should have ended there with my discovery that the eczema was directly linked to what I ate. In a parallel universe I went on to study a Nutrition degree and here I am 30 years later.

But in this universe, what happened was that I cured the eczema and had a side effect weight loss of 3 stone, so I thought my work was done and I went back to getting on with life and forgetting what I’d learned. I did a degree in Theatre Design and put back on the 3 stone I’d lost at 19. I went to work for a costume company and lost the 3 stone with a slimming club. Then I had twins and put the 3 stone back on (can you see a pattern here?). I went back to the same slimming club and lost the blooming 3 stone again. That’s 9 stone in total! (I know now that I couldn’t maintain the weight loss because my default eating habits had not changed.) All the while the eczema was back. Whilst struggling to maintain a stable weight I bought a village shop which included a food business. I created a café, selling lots of cakes and savouries. And yes, of course I ate them!

The lack of work life balance affected my mental and physical health so I sold the shop in 2010. Aged 41 and fed up (excuse the pun) with my chronic eczema and lifetime struggle with weight loss and gain led me on a quest to find a solution to my health problems that didn’t call for the same old restrictive diet advice that I’d always followed in the past and couldn’t sustain. I started to suspect that there was a link that had occurred during my lifetime between our eating habits having drastically changed and the explosion of morbid obesity, mental health issues, and chronic illness everywhere.

One of my proudest achievements was helping my son. The image on the left is Jacob taken in 2017. He was aged 17 and weighing 17 stone, (238lbs). The other images show how he achieved a 70lbs weight loss within a year and has maintained it ever since. 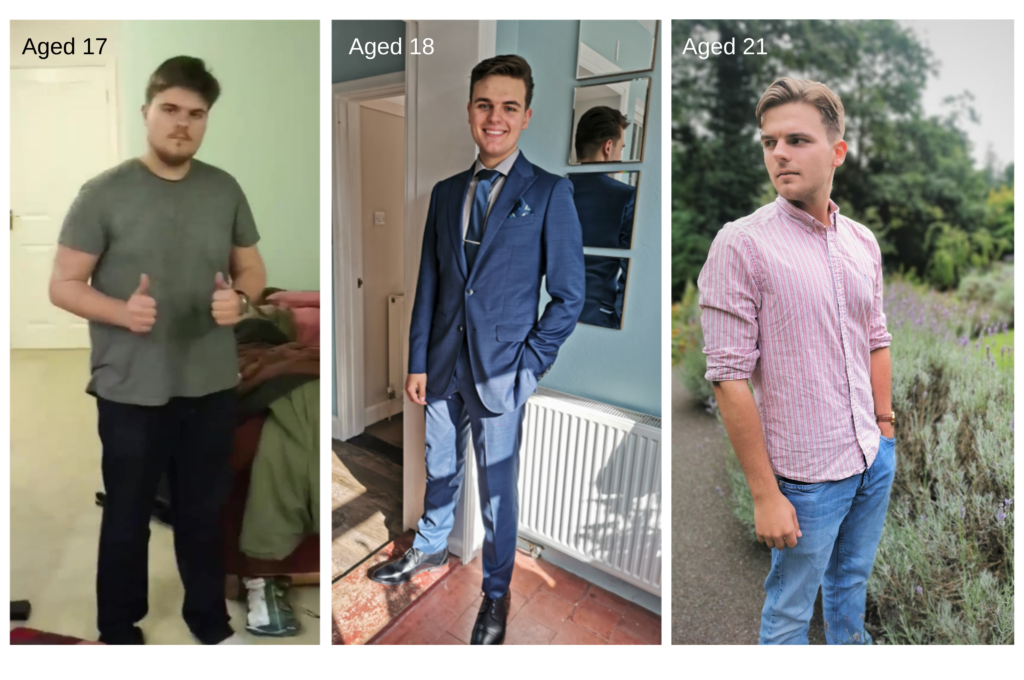 Read the story in full

His 10 year weight gain is ultimately my fault.

I totally own that fact.

I was the person who fed him and taught him about food. I am half responsible for how his body reacts to food via his biological make up.

As a nutritional advisor though, I felt it my responsibility to find a solution to this very common problem that we see everywhere: young people unable to be a healthy weight even though they are following the advice dished out by those who should be in the know.

My children (Jacob has a twin sister who has never had a weight problem) have been on my nutritional journey with me. As I cook their meals they had no choice!

When my children were young I followed the same dietary advice that is still current in the NHS and governments world wide, that of low fat, wholegrain food. Convinced that it must be lack of exercise, we swam and walked and visited play areas (the eat less, move more mantra that clearly does not work), but from about 7 yrs old onwards Jacob steadily gained weight. Much the same as I had and continued to do over many years. So I put it down to genetics.

In 2012 I started to question whether certain foods were actually the culprit and after much research and gaining qualifications I started Wide Eyed Nutrition.

Since then we have gone through myriad different permutations and combinations of food. Two main themes have been consistent and that is that we haven’t eaten fructose and gluten since.

But we have tried every other way of eating available. And pretty much none of them worked for Jacob.

The thing about being a teenager living in this social media led world as he does, being overweight holds a stigma. No matter how much we we wish it wasn’t like that or we ask people to love their bodies as they are, this selfie obsessed generation are judging each other.

The picture on the left above has had to be taken from a video we found as he would not allow pictures to be taken at that time. His self esteem was very low. Which meant he was self-conscious and reticent about participating in everyday activities. That is really hard to watch as a parent.

Jacob’s lucky break came from my own unlucky break-down.

Through yet another research phase and convinced by the hype, we all went vegan at my instigation. According to the documentaries and literature, making the switch to being vegan was going to mean that our bodies would find their ideal weight and we’d be stronger and fitter than ever.

I read all the books and we followed it to the letter. We took the supplements. We made the transition quickly and easily. Our carbohydrate intake was very high to bulk our meals. But everything was cooked from scratch with no additives and still fructose and gluten free. As far as I was concerned we had journeyed to the ultimate destination in nutrition.

There was no change in Jacob’s weight. We were all hungrier than before and we seemed to be constantly eating. But we were eating good for us stuff, so not a problem, right?

Eight weeks in and out of the blue I had what I can only describe as a mental breakdown. Bear in mind I had been eating unprocessed amazing food for over 6 years and had been feeling great.

My body instinctively knew that I was craving animal protein. It wasn’t instant, but gradually adding in eggs, fish and meat again put me back on an even keel. It took about a month but I’ve never looked back or had anything even close to that experience since.

The part that ultimately helped Jacob was my first hand experience of the link between mental health and what we eat. My focus became one of mental clarity which comes from our bodies not needing to be swamped with insulin 24/7. The increase in carbs we needed to be vegan made a huge difference. On top of that I had become deficient in vitamins B12 and D3. Even though I had supplemented them, it was no substitute for the real thing found in animal protein rich foods.

Fasting became a major focus for me. It had always been part of my nutritional advice that we don’t need to eat breakfast. But now the more I researched, the more it became clear that you can eat in a much smaller period and not feel hungry in between if you are also eating the right foods. Concentrating on what gives us physical and mental energy was now the aim, the aim was never weight loss, that was just a side effect.

Jacob started to implement my advice in June 2018. I wanted him to focus on the positive elements of never feeling deprived, just changing the times of when he ate. I never wanted it to be about his weight, so I asked him to not weigh himself (although he did at times!). He started at the beginning of June and by the time his prom came round we were able to buy him a slim fit suit.

In his words, “It’s the first time I’ve ever felt in control of how and what I eat.”

He never looked back. And we watched as he transformed into a calm and more positive version of himself.

His success comes from his willingness to give anything a go, being open-minded and trusting his mum.

My success is seeing my gorgeous boy become the confident man he was always destined to be.

Once I started to question and find the answers, I was shocked to discover that all the guidelines I had been following, i.e. eating low fat and wholegrain foods, widely accepted as fact, are just plain wrong. My eyes got wider with every shocking revelation I found.

I studied for a formal qualification in nutrition to understand how our bodies work. Through thorough research and study, I had to overwrite conventional dietary guidelines, which turned out to have very shaky science foundations, but are presented to us as fact. I backed up my well researched arguments that challenged the course material and put what I learned to the test on myself. I achieved my diploma with distinction. And I was able to throw out the weighing scales I had been a slave to all my life. And I waved goodbye to a lifetime of eczema.

The turning point in my knowledge was through achieving my second diploma in understanding diabetes. To put my diplomas to good use I started to help clients through my businesses, first Wide Eyed Nutrition and now Natasha is Wide Eyed.

You need to know that conventional dietary advice goes against your biology and almost everything that goes wrong with the human body is down to nutrient deficiencies and hormone imbalances that can be resolved with changes to what and when you eat. Understanding how your body works is the key to sustainable implementation.

The Wide Eyed course is everything you didn't know you needed to know about how food can change your life.

If like me, you are frustrated with conventional advice and you're stuck with a body you feel sure is not as it should be, book your step one appointment today.