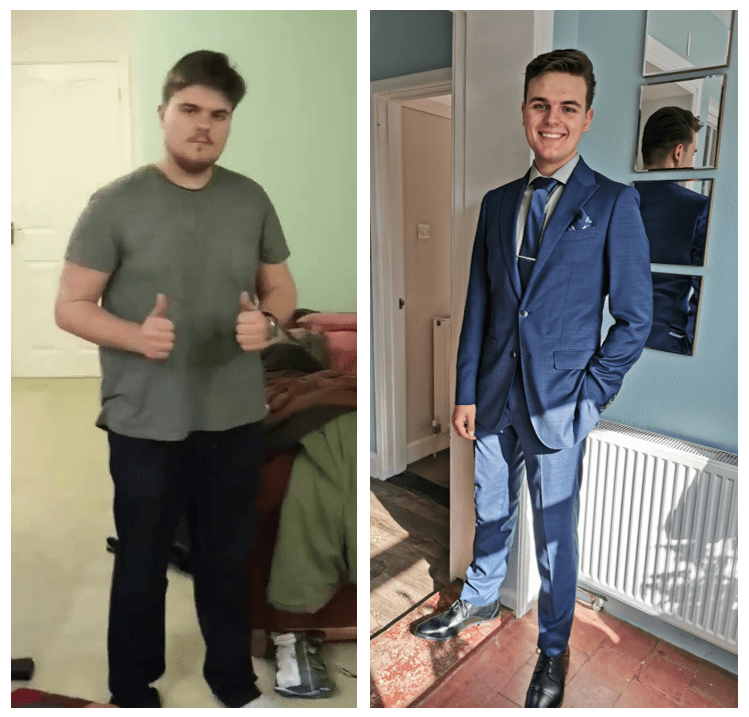 His 10 year weight gain is ultimately my fault.

I totally own that fact.

I was the person who fed him and taught him about food. I am half responsible for how his body reacts to food via his biological make up.

As a nutritional advisor though, I felt it my responsibility to find a solution to this very common problem that we see everywhere: young people unable to be a healthy weight even though they are following the advice dished out by those who should be in the know.

My children (Jacob has a twin sister who has never had a weight problem) have been on my nutritional journey with me. As I cook their meals they had no choice!

When my children were young I followed the same dietary advice that is still current in the NHS and governments world wide, that of low fat, wholegrain food. Convinced that it must be lack of exercise, we swam and walked and visited play areas (the eat less, move more mantra that clearly does not work), but from about 7 yrs old onwards Jacob steadily gained weight. Much the same as I had and continued to do over many years. So I put it down to genetics.

In 2012 I started to question whether certain foods were actually the culprit and after much research and gaining qualifications I started Wide Eyed Nutrition.

Since then we have gone through myriad different permutations and combinations of food. Two main themes have been consistent and that is that we haven’t eaten fructose and gluten since.

But we have tried every other way of eating available. And pretty much none of them worked for Jacob.

The thing about being a teenager living in this social media led world as he does, being overweight holds a stigma. No matter how much we we wish it wasn’t like that or we ask people to love their bodies as they are, this selfie obsessed generation are judging each other.

The picture on the left above has had to be taken from a video we found as he would not allow pictures to be taken at that time. His self esteem was very low. Which meant he was self-conscious and reticent about participating in everyday activities. That is really hard to watch as a parent.

Jacob’s lucky break came from my own unlucky break-down.

Through yet another research phase and convinced by the hype, we all went vegan at my instigation. According to the documentaries and literature, making the switch to being vegan was going to mean that our bodies would find their ideal weight and we’d be stronger and fitter than ever.

I read all the books and we followed it to the letter. We took the supplements. We made the transition quickly and easily. Our carbohydrate intake was very high to bulk our meals. But everything was cooked from scratch with no additives and still fructose and gluten free. As far as I was concerned we had journeyed to the ultimate destination in nutrition.

There was no change in Jacob’s weight. We were all hungrier than before and we seemed to be constantly eating. But we were eating good for us stuff, so not a problem, right?

Eight weeks in and out of the blue I had what I can only describe as a mental breakdown. Bear in mind I had been eating unprocessed amazing food for over 6 years and had been feeling great.

My body instinctively knew that I was craving animal protein. It wasn’t instant, but gradually adding in eggs, fish and meat again put me back on an even keel. It took about a month but I’ve never looked back or had anything even close to that experience since.

The part that ultimately helped Jacob was my first hand experience of the link between mental health and what we eat. My focus became one of mental clarity which comes from our bodies not needing to be swamped with insulin 24/7. The increase in carbs we needed to be vegan made a huge difference. On top of that I had become deficient in vitamins B12 and D3. Even though I had supplemented them, it was no substitute for the real thing found in animal protein rich foods.

Fasting became a major focus for me. It had always been part of my nutritional advice that we don’t need to eat breakfast. But now the more I researched, the more it became clear that you can eat in a much smaller period and not feel hungry in between if you are also eating the right foods. Concentrating on what gives us physical and mental energy was now the aim, the aim was never weight loss, that was just a side effect.

Jacob started to implement my advice in June 2018. I wanted him to focus on the positive elements of never feeling deprived, just changing the times of when he ate. I never wanted it to be about his weight, so I asked him to not weigh himself (although he did at times!). He started at the beginning of June and by the time his prom came round we were able to buy him a slim fit suit.

In his words, “It’s the first time I’ve ever felt in control of how and what I eat.”

He never looked back. And we watched as he transformed into a calm and more positive version of himself.

His success comes from his willingness to give anything a go, being open-minded and trusting his mum.

My success is seeing my gorgeous boy become the confident man he was always destined to be.